Skip to content
On Friday night, we were watching family videos on the TV.
Liberty had finished her dance class, and put on a little performance that I had taped.
Shawnie came up for a sleep-over, so we were watching that … among other old videos.

Landon was outside shooting hoops on the driveway.
He just came in, sat down on the couch, and I saw movement on the farm road.
I thought it was a deer … but it was a mountain lion!
This was no small mountain lion!
Then we looked up toward the Barn and saw a baby.
TWO mountain lions.
Maybe mama and her baby.
CRAZY!
Right outside our front door.
I wish I could have gotten a photo.

Steve and I have been talking about getting a dog.
He wants to get a small, hypo-allergenic, lap dog, for Shiloh’s sake.
The thought is that they are easier to care for … and can be kept inside.

I however, would love to get a Siberian Husky, or two, since they are pack dogs and like to stick together.  I have watched the Davidson’s breed their Burmese Mountain Dogs and Golden Retrievers. I think it would be a fun side business.  The going rate for a pure-bred Siberian Husky is about $1,500.  I have found some in Nebraska that are selling for as much as $1,875.

It would be a fun side business that would help support our family, as M@M just isn’t paying us enough to put food on the table and keep these kids going in all their activities.

In all my internet searching … I finally found a ranch in South Dakota.
A young family is breeding Siberian Huskies.  They have a lot of them too!
And … her price … $800 for a female and $600 for a male.
Sweet!
We could get 2 for the price of 1.
And, as they come from different parents, I think we could breed them.

They are stinking adorable !!!!
Now, to figure out how and when to get them, as they are 550 miles away! 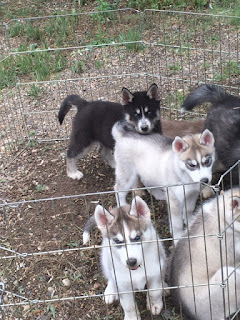