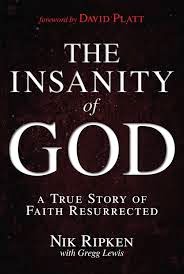 Following God in your darkest hour.
Trusting Jesus when life seems hopeless.
That is the message in Nik Ripken’s book.

From Kentucky
to Kenya
to Somaliland
to Russia
to Ukraine
to Eastern Europe
to China.

With deep conviction, they responded to the command of Christ to “go into all the world”.
After suffering the loss of their sixteen year old son,
they would continue in their calling and press on to establish The Persecution Task Force.
That mission would take them to over 60 countries,
interviewing and listening to the stories of over 600 believers.

The stories of intense persecution under communism are convicting and inspiring.

My favorite story is about Stoyan in an unnamed former communist-bloc nation.
Stoyan was in his 60s in the 1990s at the time of the interview
His father, a Protestant pastor, suffered overt persecution during his 10 year imprisonment.
His story was painful to read, yet filled with great hope, as forgiveness abounded.

At the end of their time together, Stoyan said to Nik these words.
“I thank God and I take great joy in knowing that I was suffering in my country, so that you, Nik, could be free to share Jesus in Kentucky.”
Nik, not wanting to receive the weight of those words protested, “That is a debt so large that I can never repay you.”

Stoyan, filled with passion, declared, “I took great joy that I was suffering in my country, so that you could be free to witness in your country.

… Don’t ever give up in freedom what we would never have given up in persecution!  That is our witness to the power of the resurrection of Jesus Christ!”

A convicting challenge.
One to which each of us must ask ourselves …
Have we given up in freedom what Stoyan and others had refused to surrender under the worst forms of persecution?  We may never experience persecution even close to that in our lifetime … and we have freedom!  We need to use our freedom wisely to further the kingdom of God.

May we be faithful to the command of Jesus to
“GO into all the world and PREACH the GOOD NEWS to ALL creation!”